Beginning in early February, 1850 John App started accumulating the supplies and provisions he knew were necessary for him to successfully complete the journey to California. All pioneers destined for California or Oregon who traveled along the California-Oregon Trail had, of course, the same expectations of a successful journey. Travel light, make good time, and be well provisioned were the goals John had set for himself as he made his preparations. Being ahead meant more grass for his mules to graze, and gave the travelers a better chance to avoid the deadly disease, cholera. With cholera a person could feel symptoms in the morning and be dead and buried along the trail by evening.

The following items were listed in his diary, but are probably not an exhaustive list. There are times when an item was purchased at several points in time in order to have enough, and the prices listed are representative of the era. Even though 465 pounds of dried hams, and 412 pounds of crackers may seem like a lot to take along, John knew that’s what he needed to avoid the shortages that some of the other pioneers would suffer later on the trail. You’ll smile at many of the supplies he packed – some of THEM would probably kill you!

You will notice that John is very accurate with his mileages. How did he do it? There was a device that had recently been invented called a “Frontier Odometer.” It may have been referred to by other names, but you can see and read about it here.

Notes about the list: the spelling is his, uninterpreted words have underlines where they should be, and explanations are in [ ] brackets. 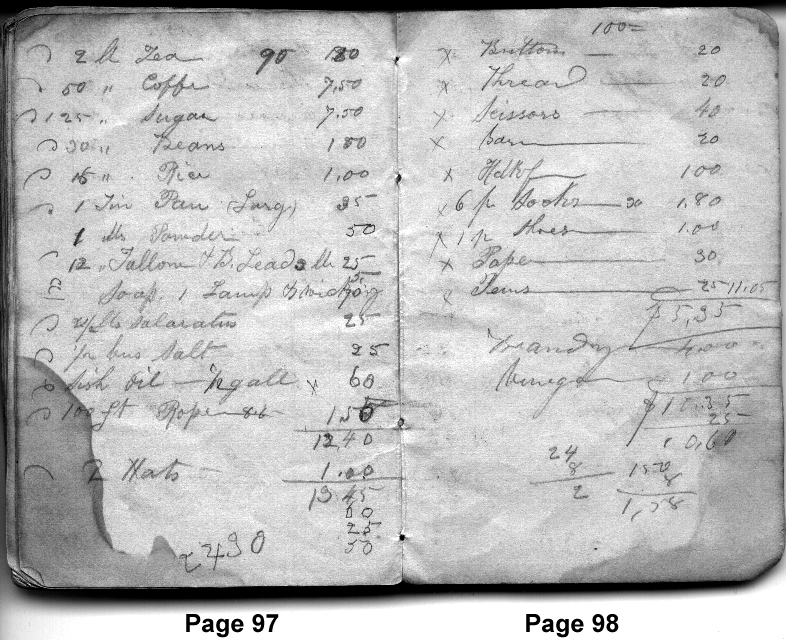