NextWhat is Known About Michael AppNext

It is surprising how many of our family stories exist that describe how Michael and his descendants contributed to the building of America. From his own modest beginnings in the wilderness of 1752 Pennsylvania, to his own participation, and the participation of two of his sons in the Revolutionary War (War of Independence), the stories are remarkable. Two App brothers fought together in the American Civil War and their experiences were diarized by the company Sergeant. Another descendant traveled west to California in 1850 for the Gold Rush, ultimately locating a large gold mine and marrying Leanna Donner, a survivor of the Donner Party expedition. Two more descendants, who were brothers, played a large role in 1930’s astronomy with the discovery of the planet, Pluto, and the discovery of Martian “canali” (mistranslated as canals), or channels, seen on that planet through earthbound telescopes. Without the life of Michael App these accomplishments would never have happened.

The first of the App family to immigrate from Germany to America, then a cluster of British colonies known as the Thirteen British Colonies (or the Thirteen American Colonies), was Michael App. He arrived on September 23, 1752 on the ship St. Andrew. Here is the heading of the passenger manifest:

The Foreigners whose Names are underwritten, Imported in the Ship St. Andrew, Captain James Abercrombie, from Rotterdam and last from Plymouth in England, did this day take the Oaths to the Government in the usual form.  No 111.

This is followed by a passenger list (see appendix for full information) which only contains the names of 180 men whose ages were 16 years and older. There were undoubtedly women and children aboard, but they are not listed. The St. Andrew’s passengers were primarily from Germany having made their way to Rotterdam usually by following the Rhine River. Of the 180 passengers listed, only the location of origin for 24 of them is known and Michael App’s specific place of origin was not among them. He was listed as only from “Germany.” It is unknown where he lived in Germany, or who his parents, siblings and other family members were. He married in 1753, the year after his arrival in America. Michael’s life before sailing from Rotterdam is entirely unknown (as of this writing in 2021).

However, quite a lot is known about Michael App after his arrival at the Port of Philadelphia. The passengers walked the two blocks from the wharf to the Pennsylvania Statehouse to be “sworn in.” Here they signed an Oath of Allegiance to England’s King George II, and at the same time denounced allegiance to their country of origin. Males were required to take the oath, usually as the heads of families. Ship captains were required to also include the place of origin for each passenger, but this was rarely done. The list of “Strangers” who took the oath contain their actual signatures, or their marks, if they could not write. Michael’s name was on the ship’s “C” list, which means those passengers are to sign an “Oath of Allegiance” to the King that includes an “Oath of Abjuration” from the Pope. Here is an Oath similar (or maybe actual) to what Michael signed in his own hand:

“I [Michael App] do solemnly & sincerely promise & declare that I will be true & faithful to King George the Second and do solemnly sincerely and truly Profess Testifie [sic] & Declare that I do from my Heart abhor, detest & renounce as impious & heretical that wicked Doctrine & Position that Princes Excommunicated or deprived by the Pope or any Authority of the See of Rome may be deposed or murthered [sic] by their Subjects or any other whatsoever. And I do declare that no Forreign [sic] Prince Person Prelate State or Potentate hath or ought to have any Power Jurisdiction Superiority Preeminence or Authority Ecclesiastical or Spiritual within the Realm of Great Britain or the Dominions thereunto belonging.

“I [Michael App] do solemnly sincerely and truly acknowledge profess testify & declare that King George the Second is lawful & rightful King of the Realm of Great Britain & of all others his Dominions & Countries thereunto belonging, And I do solemnly & sincerely declare that I do believe the Person pretending to be Prince of Wales during the Life of the late King James, and since his Decease pretending to be & taking upon himself the Stile & Title of King of England by the Name of James the third, or of Scotland by the Name of James the Eighth or the Stile & Title of King of Great Britain hath not any Right or Title whatsoever to the Crown of the Realm of Great Britain, nor any other the Dominions thereunto belonging. And I do renounce & refuse any Allegiance or obedience to him & do solemnly promise that I will be true and faithful, & bear true allegiance to King George the Second & to him will be faithful against all traitorous Conspiracies & attempts whatsoever which shall be made against his Person Crown & Dignity & I will do my best Endeavours to disclose & make known to King George the Second & his Successors all Treasons and traitorous Conspiracies which I shall Know to be made against him or any of them. And I will be true & faithful to the Succession of the Crown against him the said James & all other Persons whatsoever as the same is & stands settled by An Act Entituled An Act declaring the Rights & Liberties of the Subject & settling the Succession of the Crown to the late Queen Anne & the Heirs of her Body being Protestants, and as the same by one other Act Entituled An Act for the further Limitation of the Crown & better securing the Rights & Liberties of the subject is & stands settled & entailed after the Decease of the said late Queen, & for Default of Issue of the said late Queen, to the late Princess Sophia Electoress & Dutchess Dowager of Hannover & the Heirs of her Body being Protestants; and all these things I do plainly & sincerely acknowledge promise & declare according to these express Words by me spoken & according to the plain & common Sense and understanding of the same Words, without any Equivocation mental Evasion or secret Reservation whatsoever. And I do make this Recognition Acknowledgement Renunciation & Promise heartily willingly & truly.”

The ship’s manifest listed the passengers in order of their standing in line as they were logged into the book. Usually passengers traveled together with someone they knew, such as a relative or neighbor, and stood in line beside those people. To discover anything about the life of Michael App before his arrival it makes sense to research a few people who were ahead of him in line, and a few who were behind him in line. What can be learned about their lives might help in understanding something more about Michael’s location of origin and possibly information about his family members. 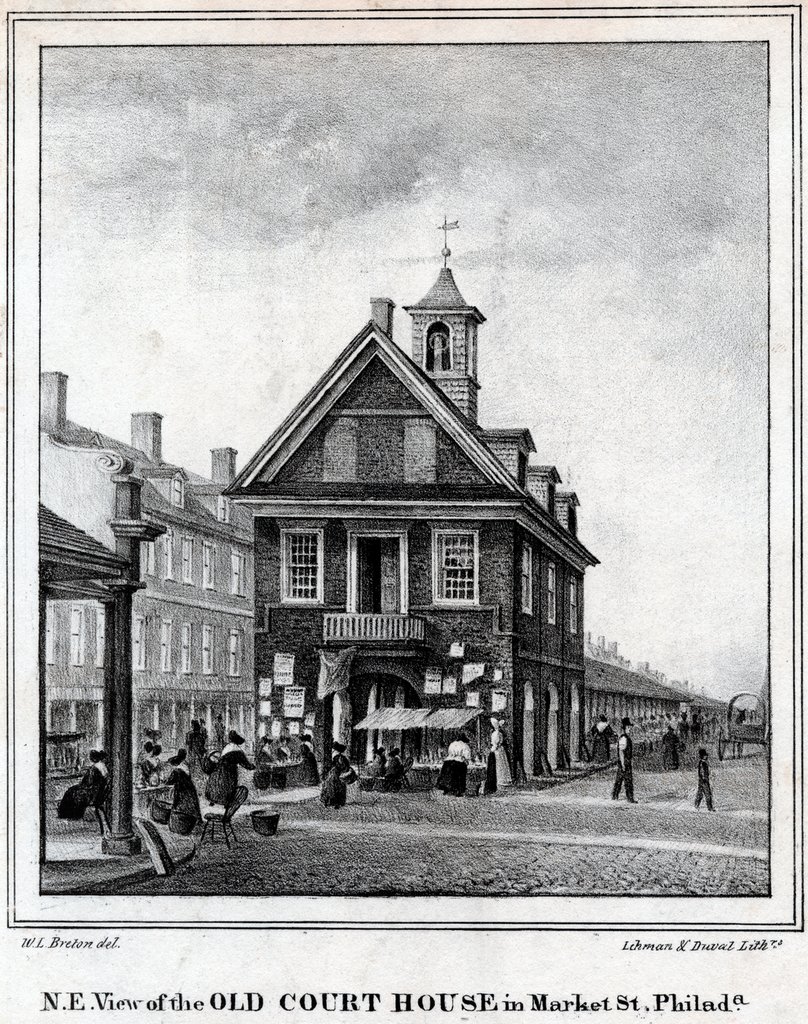 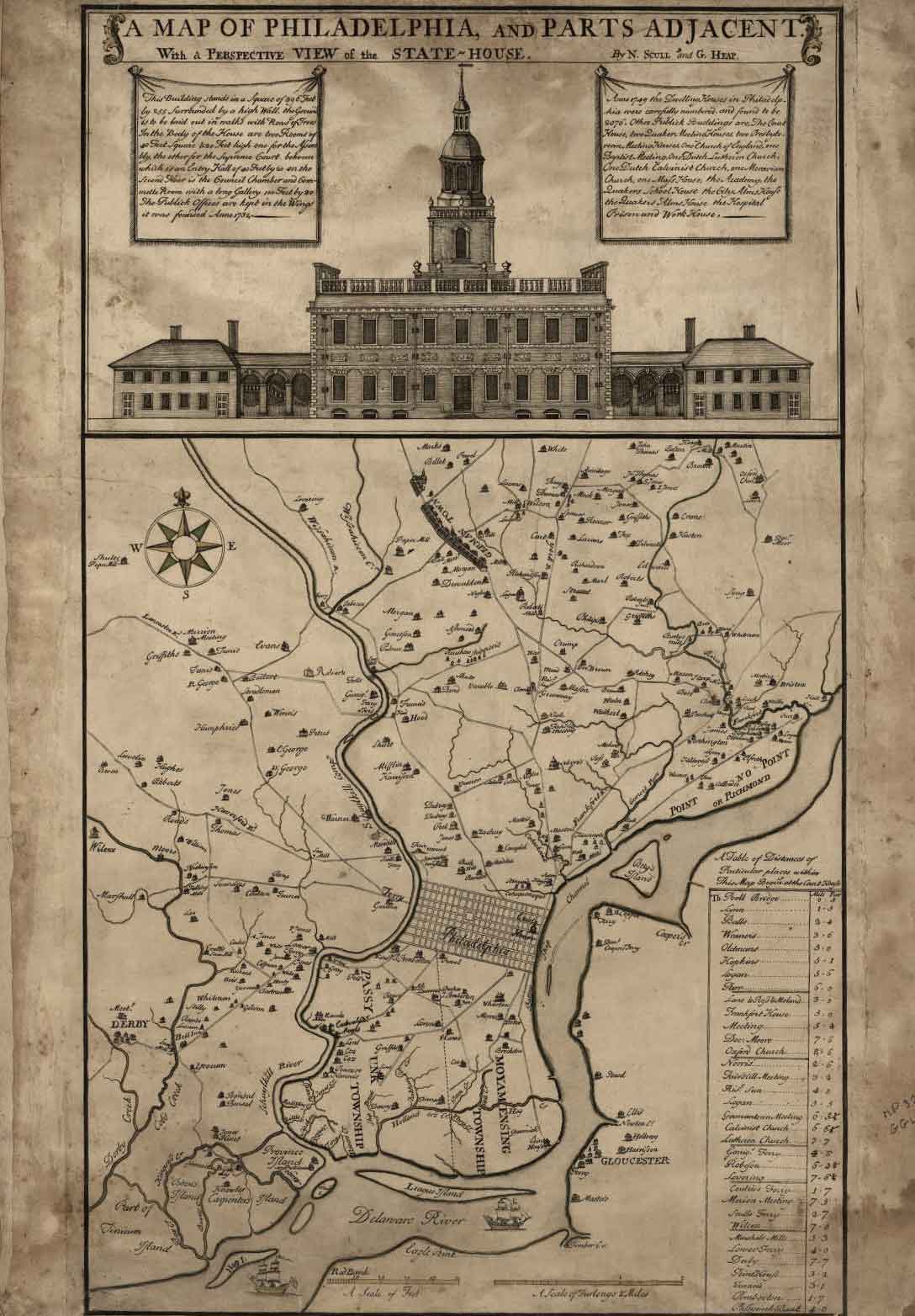 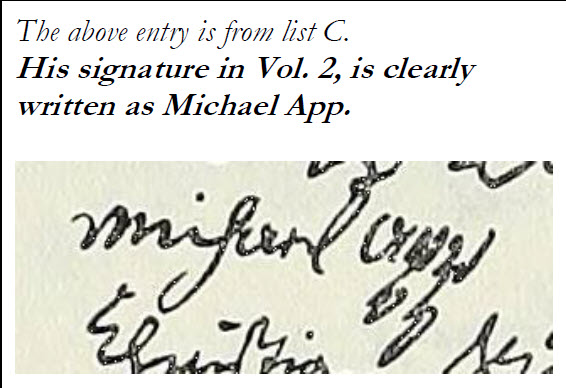