Michael App made his last will and testament on March 25, 1808, and died the following year in 1809. His resting place is listed as a non-cemetery burial. His will was written in old German script, and in 2017 was transcribed from the old German and translated into English by Urs App (a distant cousin from Germany), who taught in Universities and who is fluent in many languages. This is what Urs said about his translation effort: “It so happens that I have learned to decipher 18th century German handwriting while working on Schopenhauer’s manuscripts (when this testament was written, in 1808, Schopenhauer was 20 years old, and his handwriting is similar in many ways).”

The English translation of the will:

In the name of God, Amen! I, Michael App, resident of Lehi township in Northampton County in the State of Pennsylvania, but xxxxx, though bodily xxxx but of sound xxxx memory and judgment, have in consideration of the uncertainty of this fleeting life decided to xxxx my last will and testament in the following manner; xxxxx xxxxxxx my eternal soul in the hands of my God, and my body I give to earth. And in xxxxx of the worldly possessions and the property that God has pleased to xxxxxx, I order the following: xxxx xxxxxxx my will, that my xxxxx debts and the expenses for my funeral be paid as soon as xxxxx from my assets by my executors that will be named below. And that as soon as possible after my death they make an xxxxx inventory of my household goods, necessary expenses, and other xxxxxx xxxxxxx.  Of the household goods, the following xxxx, as will be listed below, are to be left to my beloved wife Hanna as long as she lives; but after her death they must be returned to my executors: 1. the housexxxx, 2. the living xxxxx, 3. xxxxxx xxxxxx xxxx xxxxx, 4. two buckets and a washtub; I have sold to my son Friedrich App, a piece of land situated in Lehi Township, Northampton County, according to an agreement made on the 18th of November 1780, on the sum of three hundred pounds. One hundred pounds were paid by my son Friederich, the remaining two hundred pounds are to be settled after my death as his share. It is my will that my son in law, Leonhart Hisly, should receive the sum of fifty pounds because he has not received as much from me as the other children; this sum should be paid to Leonhart Hißly or his heirs or authorized delegates by my executors that will be listed below. Furthermore it is my will that my beloved wife Hanna, née Scholl, gets one hundred pounds that will be paid out to her, her heirs, or authorized delegates one year after my death. However, if she should get into such circumstances that she needs the money for her subsistence, my executors listed below must give her as much as is needed. In any case it is my will, that my beloved wife Hanna should be able to remain in the house where we both now live, and that she keeps possession of the land, xxx also the xxx, the stable, as long as she lives. Furthermore it is my will that my beloved wife Hanna, née Scholl, should keep possession of all assets that she brought with her and that she be allowed to use them as she pleases; furthermore she should also keep all linen for her use, and also xxxx.  I further decree that the entire rest of my possessions be sold by my executors and that it be distributed as much as possible in equal parts to my children Friederich, Mathias, Leonhard Hißly and Heinrich Dreisbach. And I herewith name my beloved son, Friederich App, and my beloved friend Ludwig Kleppinger, as executors of my last will and testament. I, Michael App, the author of the testament, have signed this with my own hand and sealed. I herewith declare null and void all previously written last wills and testaments.

[Seal] Signed and published and recognized by the author of this testament as his last will and testament, in presence of us who xxxxx xxxxx xxxxx add our names and signatures as witnesses. Herman Reiß, Jacob Lindaman ….. etc ….

After Michael App’s death in 1809, and the will proved, an issue arose that caused, or worsened, bad feelings within the family. Michael’s overall intention was to ultimately distribute and treat each of his four children equally, but there was a section in his will that caused some confusion. A court case came out of it that was originally handled by something called the “Orphans’ Court.” The Orphans’ Court in Pennsylvania is an idea that was carried over from the English court system. It handled cases involving the real estate of minors and decedents which, in this instance, included probating Michael’s will.

The plaintiff was Henry Dreisbach, and the co-defendants were Frederick (Friedrich) App and Ludwig Kleppinger. You will notice in the case, that Michael’s two daughters, Anna Marie and Catharina, were not mentioned but their husbands, Leonard Hisley and Henry Dreisbach were… a reflection of the times when husbands of daughters were considered the father’s (in-law) sons. Michael had named his son, Frederick App, and his close friend, Ludwig Kleppinger, as co-executors of the will.

There were two problems presented in the original court case, the first of which, essentially stated, that Michael App, on the 25th of March, 1808, made his will; in which, among other things, he directed, that the whole of the residue of his estate should be sold by his executors, and as equally as possible, divided among his four children, Frederick App, Mathias App, Leonard Hisley, and Henry Dreisbach: That he appointed the defendants his executors, who proved the will, and that the sum of seven hundred and nine dollars and sixty-three cents, beyond all debts, funeral expenses and specific legacies, came into the hands of the executors, of which they became liable to pay to the plaintiff, one hundred and seventy-seven dollars and forty cents, one-fourth part thereof, which they promised to pay. The second count was for one hundred and seventy-seven dollars and forty cents, representing money received by the defendants, but not distributed to the plaintiff.

Henry Dreisbach won the case, but Frederick App and Ludwig Kleppinger appealed to the Pennsylvania Supreme Court where the verdict was overturned in 1815. (See the entire text of the Supreme Court case in the appendix.)

Reading between the lines at family dynamics, it is not clear what Henry Dreisbach’s wife (Michael App’s daughter, Catharina) thought about all of this. However, the “Dreisbach Family Association Newsletter” from 2015 reveals more about Henry’s character:

“From various accounts we can say that Henry had some character flaws. He was litigious, with many recorded court cases about money and/or land owed or owing. He also was charged with and convicted of – bastardy.

“In 1784 Henry married Catherine App (1763-1837), the daughter of Michael App, a neighbor in Lehigh Twp., PA. By 1800, at a time when the couple had eight children, Henry was working as a millwright across the Lehigh River. Here he had an affair with Eve Henry resulting in an illegitimate child who was named “Henry Dreisbach” after his father. The child’s mother brought a court case against Henry for bastardy – and won.” (The crime of bastardy is fathering a child with someone to whom you are not married.)

Michael App’s second wife, Hannah Scholl App, died on February 16, 1815 at her home in Moorestown, Northampton County, Pennsylvania. It is located about 13 miles east of Michael’s farm. She is buried there in the Salem Union Church Cemetery.

Her gravestone reads in German:

Here lies the blessed Hannah Magdalena Scholl, born Ehro: she has fathered eight sons and one daughter with Nicholaus Scholl: four years after he died she returned to wedlock with Michael App. She was born in 1738.

This document summarizes what is known, and unknown, about the life of Michael App as of 2021. Why did he come to America? When and how did he build the log house and the barn when he arrived late in the season for good weather? How and where did he obtain food? How did he acquire tools for building? Michael App was certainly a survivor, provided for his family, and without him there would be no stories to tell of him and his descendants, all of whom have helped make America the great country that it is today. 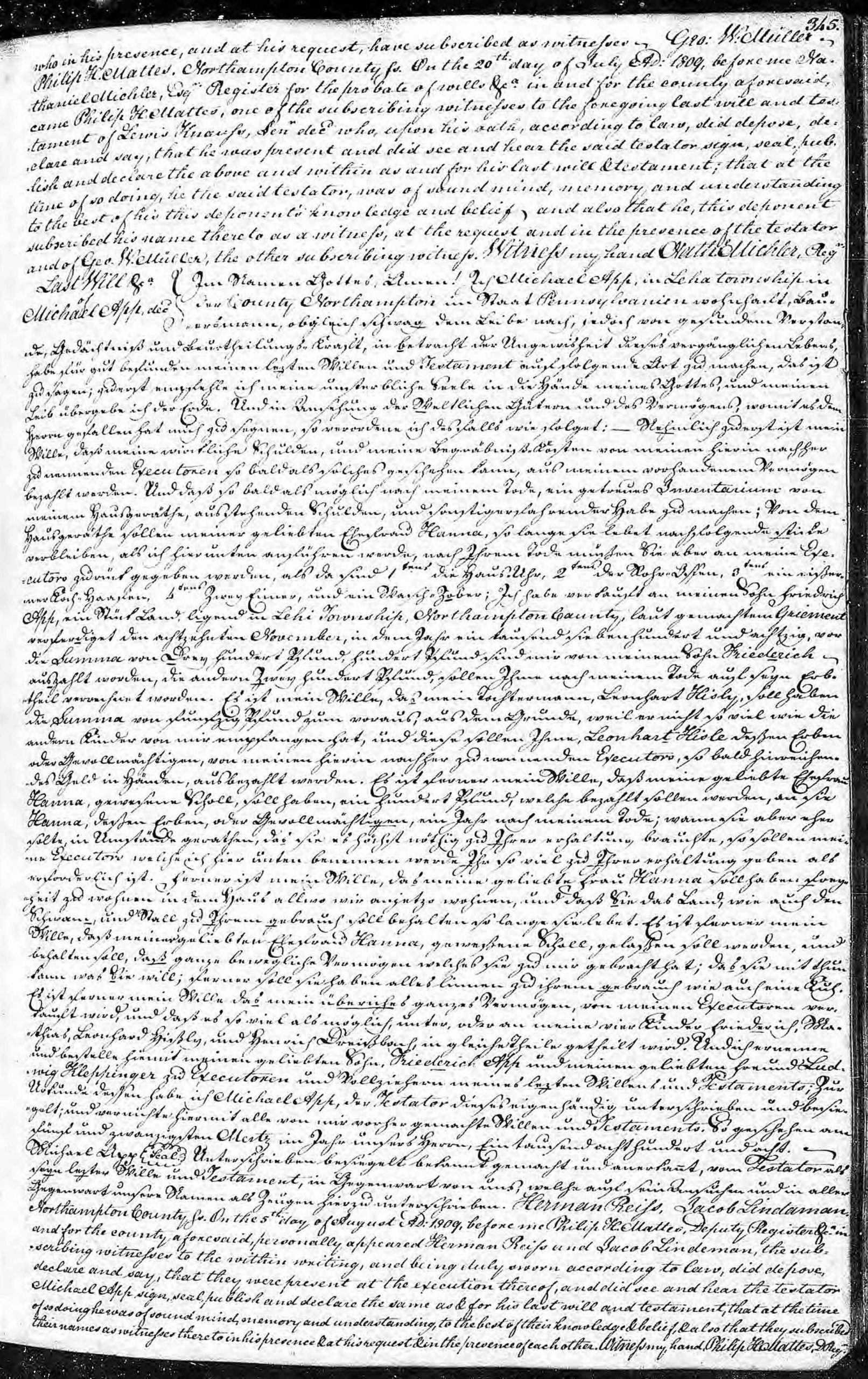 Michael's original will in Old German script
PrevPreviousLife in Pennsylvania
NextAppendix [101]: The Great Migration 1717-1754Next